Tonight saw a double Exaltation at Ryde. Brothers Tony Morris and Peter Clabby, who were both Initiated into Vectis Services Lodge 9969 together, were tonight Exalted together into Vectensian Chapter 7852, supported by several Companions from their Lodge.Tony and Peter were Initiated Passed and Raised together so it seemed fitted they should share their Exaltation. The Ceremony was performed by the MEZ of Vectensian, EComp David Hilton MBE, who Initiated Tony & Peter when he was the Primus Master of Vectis Services Lodge.Also during the meeting, two new joining members were successfully balloted for and welcomed into the Chapter. There then followed the election of Principals and Treasurer for the Installation meeting in March.There were a good number of visitors present with 13 from Yarborough Chapter 551. During his response to the visitors toast at the festive board, the MEZ of Yarborough, EComp David Richardson, presented the Chapter Visiting Tankard to Vectensians MEZ.With nearly 40 in attendance, a good sum of money was raised for the Chapters charity account by the acting stewards.An excellent evening of Royal Arch Masonry enjoyed by all. ... See MoreSee Less

Tonight the Deputy Grand Superintendent, EComp Jonathan Stainton-Ellis and the Provincial team, had an official visit to Taverners Chapter 7442 at Purbrook.A superb ceremony was given for Bro Charles Haskell who was Exalted into this vibrant Chapter. It was nice to see the work split between the Sojourners and Principals.There followed an excellent festive board including the singing of the Taverners song.In the photo, the team lined up ready to enter the Chapter. ... See MoreSee Less

Timeline photosJonathan Spence, Pro Grand Master and Pro First Grand Principal, spoke to Freemasonry Today to reflect on his time as a Companion and talk about how the Royal Arch can enrich a Craft Freemason's experience. Read his Q and A here👇www.ugle.org.uk/discover-freemasonry/blog/qa-jonathan-spence#Freemasonry #Craft #Chapter #RoyalArch #Brotherhood ... See MoreSee Less

May the New Year bring you happiness, peace, and prosperity. Wishing you a joyous 2023! ... See MoreSee Less

Timeline photos🫴Manufactured in 1934, this alms box in Crown Derby porcelain is in the form of a domed vault surrounded by miniature Royal Arch working tools.The Latin inscription on the base translates as 'He gives twice who gives promptly'.📷 Museum of Freemasonry ... See MoreSee Less 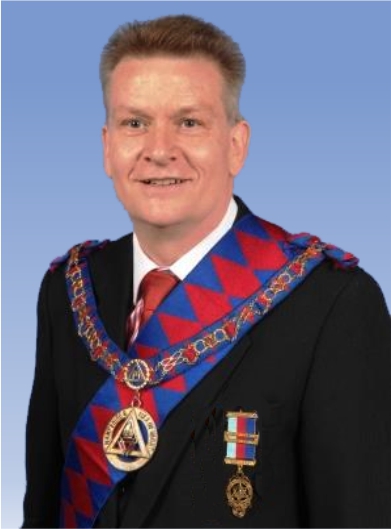 A Welcome Message from the Provincial Executive

Freemasonry is a journey of self-discovery and teaches important moral lessons. It is open to individuals of good standing, who express a belief in a Supreme Being and allows men of all religions and faiths to come together in a spirit of mutual respect and tolerance. The Royal Arch is an integral part of Pure Antient Freemasonry.

The three degrees of Craft Masonry deal with material matters. They allegorically trace man’s intellectual development from his birth in the first degree, through the intricate winding pathways of his mortal existence to his symbolical death in the third. The Royal Arch is the climax of that progression and contemplates the whole in the context of eternity. It contains the true essence of the moral philosophy underscoring Freemasonry. The ceremony of exaltation emphasises the Glory of the Most High and the Power of his Holy Name. It teaches each Companion the duty he owes to his Creator and stresses his total dependence on the Almighty, the Beginning and the End of all things.

Hence the Royal Arch is the essential and natural progression after the three Craft degrees and should be made by Master Masons, as “…the integral final step in Pure Antient Freemasonry”. I would urge them to do so as soon as they feel at ease with the teachings and symbolism of the Craft. Ideally, ALL Brethren, who intend to progress through the Master’s Chair, should have been exalted into the Royal Arch before they have progressed to the office of Deacon in their Craft Lodge.

From the Provincial Executive team